I recently watched a documentary called ‘Let the Fire Burn‘ (2013). It’s been a while since I sat down to watch a documentary, maybe because I’ve not spotted one that really interested me, either way it was thought provoking. It’s about the “stand-off” that took place in 1985, involving the MOVE organization. “stand-off” would be a very crude way to describe it, because fundamentally it was full blown police brutality, which isn’t a surprise, considering it was very common in the 80’s against black people in America. 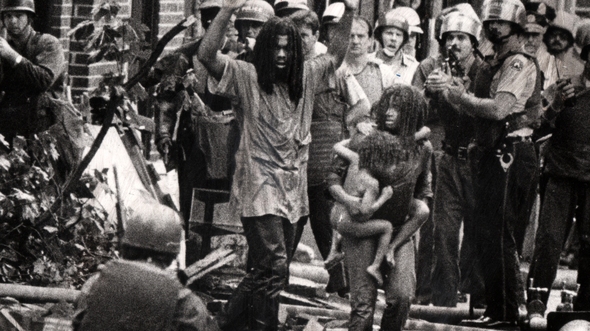 The title is a quote that was said from the police to basically “let the fire burn” to the fire-brigade while the people were in that house. Before the fire, they drop explosives from above, which was basically a bomb that starts the fire, then they allow it to burn resulting in the deaths of the people inside. Near the end the police get interviewed and it’s very obvious they’re lying through their teeth and their meaningless expressions give it all away.

What I want to focus on now isn’t how or why this happened – that’s been analysed enough by the committee, but how this makes for a very clear example of how obvious it shows that the black people are so divided.

Going back 9 years or so,

28 Mar 1976, seven MOVE members were released from jail and went to 309 N 33rd St where a celebration was held. Police were called. A neighbor described the resulting melee as: “I think the police were provoked, but I think they were overreacting. I’ve never seen such brutality.” Six cops were hospitalised and six MOVE members jailed. Life Africa, three-week old son of Janine and Phil Africa, was killed. There are sources documenting that MOVE members showed the dead child’s body to city officials who took no action because officially there was no birth certificate for a “Life Africa”. Covered in pages 11-14 of John Anderson and Hilary Hevenor, Burning Down the House: MOVE and the tragedy of Philadelphia, W.W. Norton & Co., 1987. ISBN: 0-393-02460-1. Naaman Brown (talk) 00:58, 27 July 2010 (UTC) – Wikipedia.

One year later –  nine MOVE members were convicted for the death of a police officer. The ballistics of the shots fired to the police officer that died shows that they come from an angle not possible by the MOVE members that were all in the basement.. The nine members are still in prison, to this day..

The hypocrisy is nobody was jailed for the deaths of the MOVE members and here we have nine still in prison even till this day today for their actions involving that death.. If the police get away with negligence for what happened in 1985. Different laws for different people.

They [MOVE members] all surrendered and all were viciously beaten after. Delbert Africa; under video footage gets brutally beaten just after he surrenders, there is clear footage of this and yet the police get off free with no charges and even one of the police officers in the attack is back involved in the 1985 tragedy.

Nine years after the above events, MOVE relocates and in the documentary one of the members explains a sort of shift in attitude, a sort of bitterness and I’m not surprised. One member is interviewed early in the start, ex-Black Panther member, he explains that instead of revolting, he finds MOVE a more revolutionary way of revolting, invoking “change” through themselves that spreads itself and changes the system through the people rather than forcing the system to change head on (that’s what I at least got from it).

This indeed does sort of contradict how they behave. The bunker seems like it’s trying to fight the system head on.. So does the loud speaker and it all seems very flawed.. From this only; the whole neighbourhood turns against them, being predominately black and yet MOVE were completely alone.. One could assume the “system” finds a way to meet them head on like every other form of revolt.

There’s a scene in which there’s a MOVE member calling people mother fuckers and just talking a lot of rubbish through the loud speaker, which doesn’t quite make sense and I’m not sure if footage is even in context as it might have been a response to provocation.. The testimony is backed up by what looks like another black person primed at being completely naive, but if this is true then John Africa’s master strategy clearly had a fundamental flaw or was not followed, which was failing to stay neutral to the average people.

The Mayor of the city was black, the two news reporters was black and they all pretend as if the world, the decade they live in is free of racial prejudice. I suppose they were just pretending or maybe it’s what allowed them sleep at night, so they could continue their personas. Or if you continue to lie sooner or later a lie becomes true? Maybe that’s it..

Though I think the Mayor was simply duped, as he claimed he ordered for the fires to be put out, but a little bit like dealing with the devil, they toyed with him and aimed the water to the surrounding buildings.

The two black news reporters seem to be in character as if they’re reporting on a live car chase or bank robbery.. It really doesn’t sit right with me.. Sort of reminded me of a black slave watching another slave be beaten to death.

Why were they (the black local community and MOVE members) not standing together side by side? Not for the things they [MOVE] say and do, but for the direct actions by the police for being biased and filled with prejudice. Preferring to wait their turn to be treated badly.

By the end of the documentary, we listen to what seems like the only police officer with a soul in the whole incident and after James Berghaier’s testimony, “nigger lover” was written on his locker, he ends up leaving the police force.. Ruining his career simply because of treating the MOVE people in the house as Humans and the whole point of him being an officer of the law.. This is how far the  local black community were detached from the reality. In the same day and age discrimination was so blatant, they were standing by watching what was obviously racists hiding in sheep’s clothing, as always using common ground as a base for support amongst people, simply because MOVE was not behaving like them to pretend to be accepted by the white Americans.